​Predators from all angles try to whittle away at our ability to exist comfortably, our bodies, our minds, and, at the worst of it, our very souls. My guest today has years of experience working with the mentally ill, specializing in schizophrenia and related disorders, and has gathered a mountain of insight into the true nature of what haunts far too many of our brothers and sisters, tearing apart their world and all of our worlds. Jerry  a researcher, author, speaker, and harbinger who asks us to look more closely at to see what pokes and prods, hoping we will break. Website: https://www.rogueways.org

The Voices in My Head Don't Like Me: Schizophrenia, Shamanism and the Archons. Part One.

Jay Weidner is joined by Psychologist Jerry Marzinsky as they discuss the idea that mental illness is frequently brought on by malignant voices in the head. Marzinsky's theory is that these voices are exterior to the person hearing them. Is it possible that the human race is being attacked by mental, energetic entities that seek to destroy the individual? Buckle up!​

​​Tonight on Rogue Ways we have a very special and exciting guest who comes to us not from her background as a Civil Engineer, but from her background as a soul plagued by dark and demonic entities and a as a conqueror of those evil aspects of existence who has worked tirelessly to bring the ability to disperse the darkness to anyone who so chooses to fight the battle.

​​​Demons and the System

Are your thoughts your own? Let's take a fascinating voyage through the psychotic mind into the presence of another world. What do the voices say? You may realize that we all hear the voices, some just hear them louder. Are schizophrenic voices supernatural psychic parasites preying on humanity and guiding us to discord? 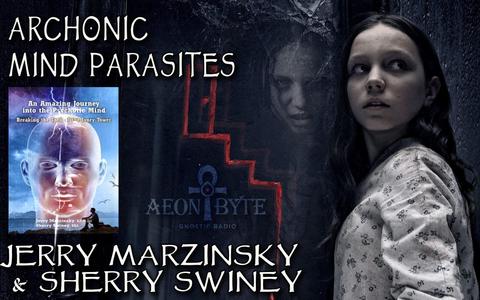 Jerry Marzinsky | Mark Windows on Windows On The World | Are Demons Real?
Mark Windows talks to Jerry Marzinsky, a psychiatric practitioner from Tucson Arizona. Jerry worked in major government psychiatric facilities and came to the conclusion that the voices heard by many paranoid schizophrenics were not merely random hallucinations.

Emanuel ​Swedenborg - The Battle for the Mind and Soul Part 1

Jerry Marzinsky returns to The Cosmic Switchboard to discuss the work of Christian Mystic Emmanuel Swedenborg and how the latters work dovetails into his work today with people hearing voices and under malign spiritual influence. Jerry also talks about the new book he is working on with Sherry Swiney who has also been interviewed on The Cosmic Switchboard Show.

In Part 2 Jerry Marzinsky talks about the writings and testimony of those who have been under spiritual warfare attack from the entities behind the Intrusive Thoughts and Voices. Jerry also talks about the Shadow People.

On December 3, 2019, Fahrusha was pleased to welcome Jerry Marzinsky to “Shattered Reality Podcast”. Jerry has been a licensed psychotherapist with over 35 years of experience working with schizophrenic and other psychiatric patients in state hospitals, state prisons, and hospital emergency rooms. His formal academic training comprises a B.A. in Psychology from Temple University, a Master’s Degree in Counseling from the University of Georgia, and two years of study in a Ph.D. Psychology program. Website:
https://shatteredrealitypodcast.wordpress.com/2019/12/29/97-entities-or-schizophrenia/ 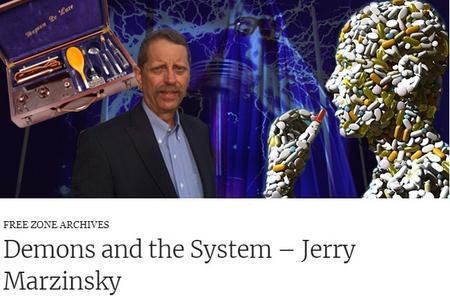 Jerry Marzinsky | REALiTY Check with Jay Weidner - Uploaded March 3, 2020
The Voices in My Head Don't Like Me: Schizophrenia, Shamanism and the Archons. Part Two

​In this episode Jay Weidner brings back psychologist Jerry Marzinsky for a deep dive into the problem of malignant voices that are exterior to the victim. Jerry tells the story of Lila who, through a session with Jerry, realizes that the voices are not her and that she can have some control over them. Then Jerry and Jay touch on some movies that discuss this same subject.

​Psychiatry and traditional medicine have failed in treating schizophrenia. They have done more damage than good if one includes pharmaceuticals. But what if the “voices” of schizophrenics are not hallucinations caused by chemical imbalances? What if they are malignant entities feeding off mental negativity and pain? We explore this possibility from two sides: a psychiatric evaluator who confronted these mind parasites while working in prisons; and an individual who escaped the grip of the “voices” by drawing from esoteric techniques.

Astral Guests – Jerry Marzinsky and Sherry Swiney, authors of An Amazing Journey Into the Psychotic Mind – Breaking the Spell of the Ivory Tower.

Please go to Jerry Marzinsky's page for more videos like this

The only source of knowledge is experience. Albert Einstein

Jerry shares about his discoveries practicing as a psychotherapist in mental hospitals and state prisons. His formal academic training comprises a B.A. in Psychology from Temple University, a Master’s Degree in Counseling from the University of Georgia, and two years of study in a Ph.D. Psychology program.

Working with schizophrenic patients he realized the voices in their heads were not hallucinations. Jerry started to question the psychiatric medical authorities' view on the treatment and diagnosis of mental illness. The standard “You have a chemical imbalance” is propaganda. No chemical imbalance has ever been documented in a medical journal. Meanwhile, schizophrenia is a multi-billion dollar a year industry. Through his own direct experience, he talks about how we all are affected by these voices working through our own minds via thought influencing and how we think they are our own.